New Whatsapp text bomb that can crush your phone. Warning! 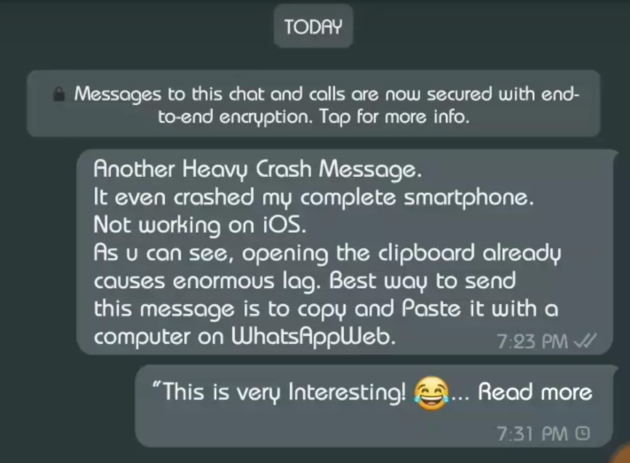 After the devastating text message bomber from february, which was a telegu language character that crashes gadgets like iphone, ipad and macs running on iOS and MacOs platform. There is a new text bomb that can cause Android and iphones devices to freeze.

It can cause serious harm. It can be spread by text messages via Whatsapp. The threat is so big that it can crush your device and your device may need to reboot. Theres two way a potential attacker might implement it.

One starts with the text saying: "This is very interesting followed by a crying while laughing emoji and then 'Read More'. Pressing on Read More could make your phone Freeze.

Another contains a Black Dot and the words 'you touch the black point then your WhatsApp will hang' and pressing the the black button can crush your device.

How those Bug works?

Both of the bugs work by overloading thousands of text characters. Which leads to a app freeze and gives a warning message that the app is not responding.

A reddit user who spotted the bug says, 'Not only is WhatsApp crashing, my whole system process gets stuck, and I need to restart my phone'

Our suggestion is that anyone who got this type of text should delete the message. Best way to deal with it is to delete to whole conversation thread and not to click on the message.

WhatsApp has yet to issue a statement, but the Facebook-owned firm is likely to issue a software patch fixing the problem in the near future.

Whatsapp did however issued a software patch on 09/05/2018. But wheather the problem has been fixed or not is yet to confirm. We suggest all our user to keep their apps updated. Thanks for reading.