Jorbangla Mosque is located in Borobazar Mauja of Kaliganj upazila of Jhenaidah district. There is no accurate information about naming Jorbangla (pair of Bangla), but in the current context there was a pair of stairs in that place.

That is why JorBangla is named after it. According to some others, there were pairs of tigers. Because of which Jodh Bangla has been named. 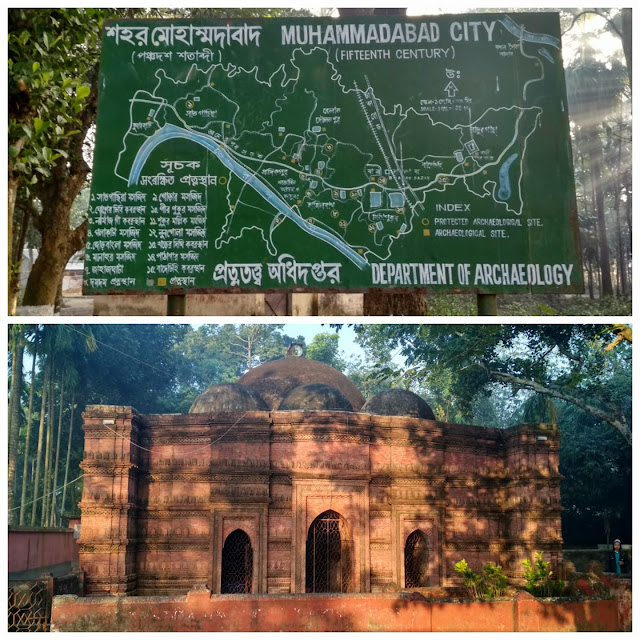 In 1992-93 the excavation by the Archeology Department was discovered as a single-domed mosque.

There are several graves beside it. Jor Bangla Mosque.

The pond of the north is known as blind punk. Perhaps during the reign of Sultan Mahmud Shah, the pond was probably excavated for the needs of drinking water and drinking water.

The mosque is situated on 10/11 feet high platform, in small beautiful thin brick gait. From its entrance to the river, huge stairs made of brick have fallen. On the western wall there are three mehrasabs in terracotta design and decoration.

The task of plunge of chun sand is also noticed. Mehrab has a small pillar on both sides. The Central Mehrabati is made of flowers and spatials. This beautiful mosque is a symbol of Muslim civilization and excellence in the beauty and craftsmanship of the architectural industry.

In the north and south walls, there are four small niches on each wall of the mosque. On the east side of the mosque there are three well-appointed archways. The four corners of the mosque have four well-shaped towers, The lavish vaulted mihrabs are nicely decorated with floral and geometric designs.

It is possible to visit this mosque by bus or CNG from Jhenaidah. This mosque can also be visited with its own microbus, private car.

There is no arrangement for tourists staying in Jhenaidah. The quality of services you have to stay here may not be so good for you.